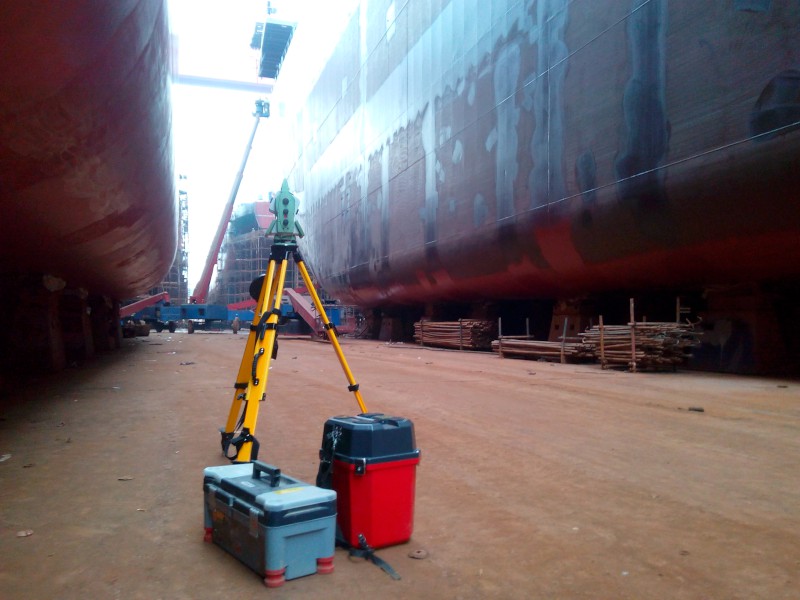 For the needs of the hull 3D laser scanning and modeling – geometry verification, AKSM provided high precision equipment and all the necessary calculations. In addition the deviations found on specific frames during the verification survey period, in relation to the Nominal Values. Summarized, the items appeared below have been evaluated:

In order to accurate capture the constructed geometry and examine – determine geometric characteristics across the  constructed hull, a terrestrial TopCon 3D Laser Scanner (GLS 2000), together with a Leica Multi station MS-50 (3D scanning and precise total station) was used for site activity. The scanning accuracy of the Multi Station MS-50 is 0.8mm at 50m distance and 1” (0.3 mgon) angular measurement standard deviation. The scanning accuracy of the GLS-2000 laser scanner is 3.0mm at 110m for point cloud collection.

As far as the stern tube casting – bearing 3D alignment is concerned, the deviations found during the verification surveys in relation to the Nominal Values. Summarized, the items appeared below have been evaluated:

For the scope of the work described above, as the main purpose was to determine geometric characteristics, the IMS (Industrial Measurements System) Leica Total Station TDA5005 was used, with the corresponding S/W Axyz, for 3D measurements.